A Concept is Born

In 2007 Serena was giving workshops at Landhuis Bloemhof, one of her many part-time jobs at the time, which she had to do in order to support 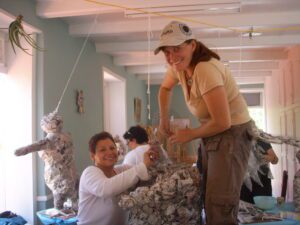 her family. There she

wanted to teach her students the art of papier- mâché, and so the very first Chichi® was born, made from chicken wire, paper and glue. Chichi® was primarily inspired by voluptuous art, similar to the previously known ancient ‘Venus of Willendorf’ sculpture, the ‘Nana’ by Niki de Saint Phalle and the art work of Fernando Botero.

After the workshop Serena felt inspired, her ultimate goal was to go back to her original calling and start making molds for the Chichi® sculptures. She made a few versions of Chichi®  from papier-mâché and also sculpted with plaster,

but it turned out to be very time consuming and intense. In the mean time she started to shape the base model for Chichi® out of clay, then she had already designed all the shapes and sizes. She wanted to create a concept around Chichi®, where she would be lying, sitting, standing, running, flying and swimming. She would later also branch out to create the male version now known as Bubu®.