We are very proud that an XXXL Chichi® is standing at the entrance of the Resort Hotel to welcome all guests with open arms to Curaçao!

For those wondering why she is white…
The white Chichi® at Sandals® Royal Curaçao is an custom made order especially designed for the Resort Hotel. Our client was inspired by the Royal Delft Blue porcelain to outline their brand. Serena designed this with the beauty of Curaçao like cactus, beach, kunuku houses, dolphins and tropical flowers painted with cobalt blue to represent our Dutch Caribbean roots.

Our brand, Chichi®, is registered in all colors, and we want to point out that the black or white doesn’t refer to a skin color. The black is our bestselling item for the last 13 years. Black makes the colors stand out better and shows the heritage of our African Caribbean background. If we, for example, give Chichi® a brown or green color, the colors of her outfit would shine less brightly.

This Art work stands for BIG love and BIG care, she is a big sister.

We don’t sell these porcelain-look Chichi’s® in our shops, however it is possible to order a custom made Chichi® with a Delft Blue design.

Art can evoke lots of emotions and this Chichi® did, since people are not used to a white Chichi. We appreciate the conversation about it and respect each others opinion. We had the honor to talk with Milany Maduro about this subject and she wrote is this letter after our phone conversation.

My entire family still lives on the beautiful island Curacao. When you look at my family you will see all shades and shapes. I think that it is the same for most of the Yu di Korsow. We are a mix of African, Portuguese, Spanish, Dutch, American, Indian, and Caribbean influences. I live in The Netherlands but go back to Curacao for holidays.

Over the years there is a specific character on the island Curacao that caught my attention and that I really became very fond of. As are my mother and sister as well. I am talking about Chichi. I would find this beautiful sculpture in many places on the island. After my sister telling me that it represented an older sister, I fell even more in love with her.

At home we learn that you should not air your dirty laundry outside of the home, it is best to discuss things at home, with a sister for example. Me myself being the older sister I loved that Chichi was an older sister to everyone. I could never resist taking a picture with her everywhere I saw her. My favorite picture being one of myself standing next to her whilst I was nine months pregnant of my second child and feeling as big as Chichi herself (and going through difficult times). This time she was placed at the Renaissance.

I am telling all of this to illustrate how much I identified with Chichi and to explain how come to me she started feeling like part of Curacao, of my home, of my story.

To me, besides being a sister to everyone, Chichi became part of an expression of our culture. She celebrated those round figures that a lot of us ladies from Curacao have. The love for bold colors and being so present. Living in a Western society where these round forms and being so present can be less appreciated, I always loved seeing her so predominantly put at entrances and other places. She looked proud (even though she has no facial expression). I loved that she was black, round with bold colors but was never hidden. Never apologizing for who she was, rather fully owning it. She was a character I felt very proud of. In Papiamento I could best describe my feeling as: ta di nos e ta (she is ours, although in Papiamento this has a deeper feeling / meaning to it, that I can’t quit describe). Not only ours, she felt like she WAS us.

To me Chichi became a character that pertained to Curacao. So, when last week I saw an Instagram Reel of an XXL Chichi in a Delfts Blauw dress being placed at Sandals (Luxury resort), but she was white, I felt a little heartbroken. I literally reacted to the reel by sending a broken heart. Sandals is a luxury brand within tourism, so it hurt me a little that at that luxury brand my Chichi would be depicted as white at the entrance.

My Chichi…. However, Chichi isn’t mine. Chichi is an artistic expression of Serena Israel Anthony. For years she has been enriching our island with these beautiful sculptures. The team of Chichi reached out to me, wanting to know the reason behind my reaction.

This is the reason I reacted with the broken heart. For me it was a pity that, at a place where so many tourists would see Chichi, only half of our story was going to be told (in my opinion).

Curacao is a former colony of The Netherlands. To this day we form part of the Dutch Kingdom actually. Having this history with The Netherlands, Delfts Blauw is something most of us associate with The Netherlands (in 17th century Chinese porcelain was very popular amongst the wealthy in The Netherlands.) In Delft (hence the name Delfts Blauw) they started making crockery that they would paint white and make these blue impressions on. They started depicting Asian forms but later expressed Dutch things on their creations. In a way it is a more accessible answer to the expensive and popular porcelain. Whenever I see blue on white things I immediately think: The Netherlands (I don’t have a Chinese association with it).

For that reason, the Delfts Blauw dress of Chichi was telling part of our history to me. That part of (Dutch) history is something we see back in our language, in our food, in our architecture, in our culture, in everything on the island Curacao. It is not something I think we should not shy away from, rather embrace. It is part of us.

Over the years all that live on the island have been trying to give this colonial part of history a place. Some feel that there is a lot that needs to be fixed, to recuperate a balance. Some ignore it completely. And others have very fierce reactions when it comes to this part of our history that translates back to very fierce reactions regarding political and cultural things that happen or do not happen on the island. Either way it is something we cannot just wipe away. It is something that needs some sensitivity from all of us that form part of dushi Korsow.

Know this colonial era of course also brings us a massive African heritage, that you can also find back on the island. Again, in our food, music, language, everywhere. I have always been proud of this and as I grow older, I have noticed I embrace it even more. The black color that Chichi so often has, to me showed our African heritage. That is the reason I felt disappointed when I saw her as white. I felt as though part of my story got left out. The people behind Sandals and representing Sandals themselves, as well as all the people that they will be welcoming would only see part of my story. My African heritage, which I am so proud of, and that Chichi showed so unapologetically wasn’t included.

This is all just my opinion of course. My interpretation, my emotion when it comes to Chichi. But she is not my mine. She is the artistic expression of Serena J. It was lovely of her and her team that they were interested in my opinion. But it is exactly what it is in the end, my opinion. As Serena explained, we do not only have black Chichi’s (older sisters) on our island, but we also have white ones too. Chichi being her art, she of course has every right to express this part through it as well. Her art did exactly what it is supposed to do. It sparked conversation and interaction between us human beings. It connected us. It brought us closer, it connected us. 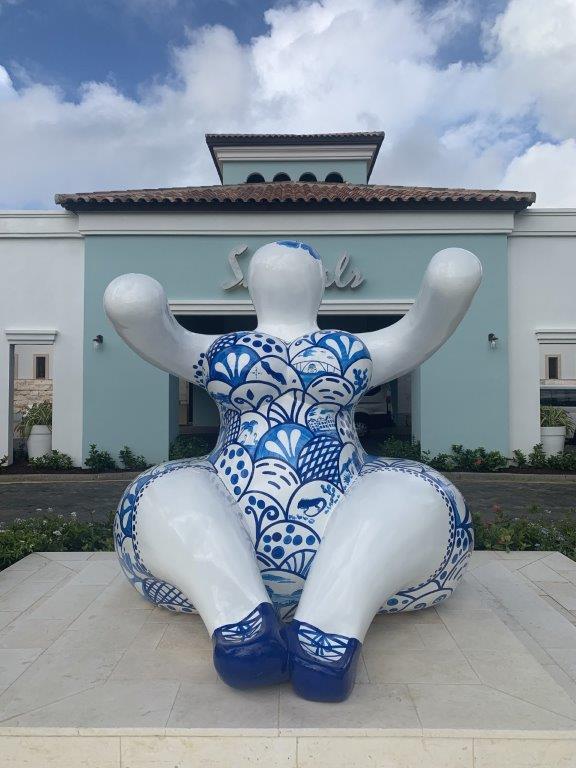 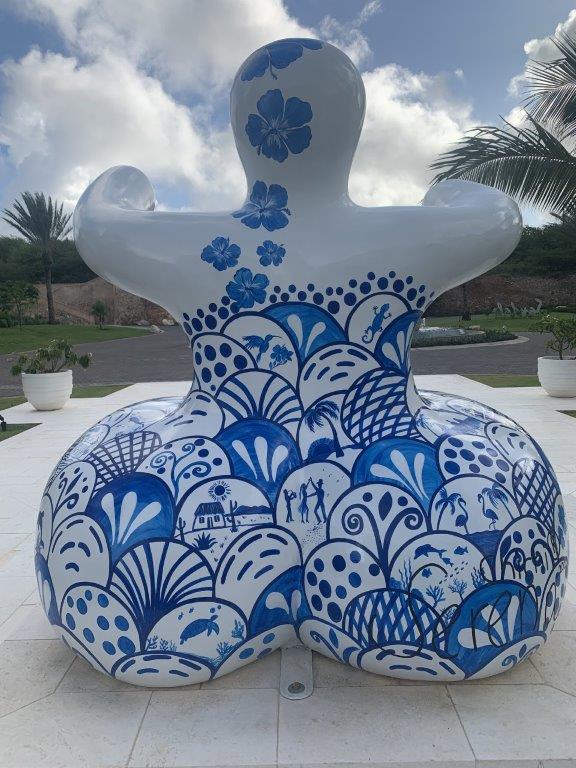 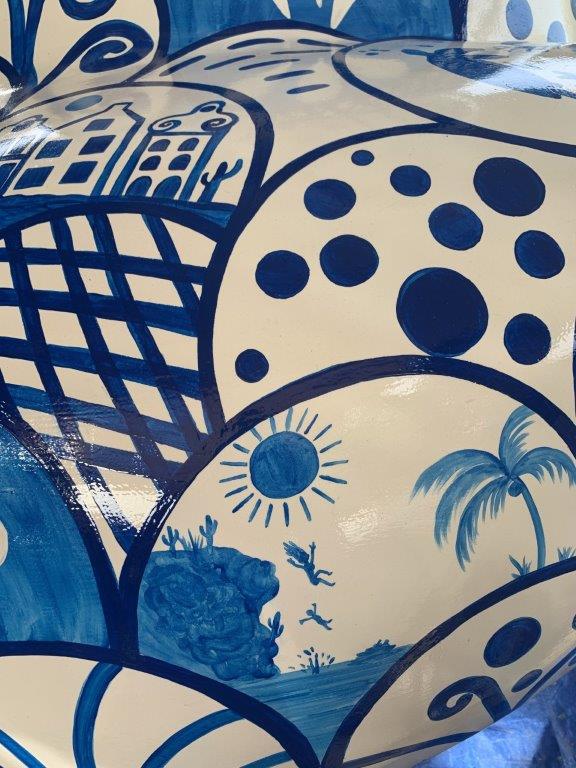 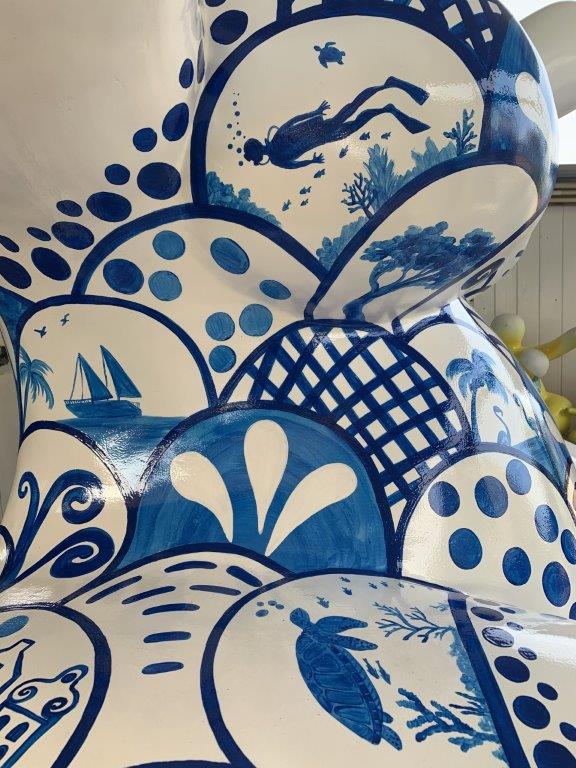 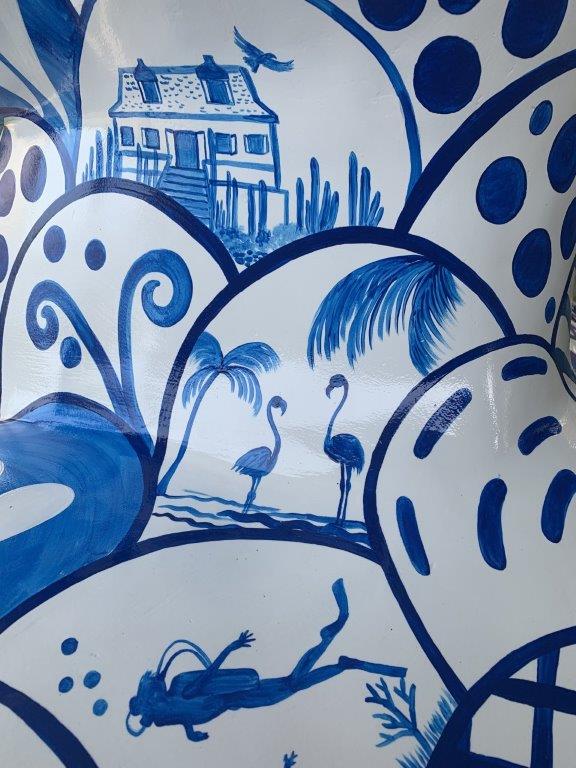